For the past few years I’ve been fully immersed in the tech startup scene in Boston, working long hours at a medical tech startup. Briefly, we’re calling ourselves a medical data company. I’m looking forward to a more public marketing effort, so that someone else can figure out a clever, concise way to explain what we do. I struggle to find the words to convey the scope and depth of what we’re doing to even my technically inclined friends. The struggle to do so is a worthy one, what is programming if not translating human-meat-space desires into precise, uncaring machine language? Ideally we’d be able to push our thought stuff lossless-ly both down and up the org chart. I entertain this fantasy only because the whole of our startup can still fit into a single office, I’ll get learned soon enough.

The point of creating and writing this blog was to exercise that muscle; compressing, manipulating, editing technical topics into as plain english as possible. It turns out that among the sea of hardware, software work needing to be done, making a product for a heavily regulated area, like the medical industry, requires an incredible amount of written documentation. That’s the truth. I’ve been writing a lot these past couple of years, just not for you! I can only speak to my experience at my current employer, but if it’s breadth of responsibility you’re looking for, a startup will stretch you far past your comfort zone. Lots of opportunity to create technical and design foundations that will last much longer than maybe you intended for that one proof of concept to exist. The ultimate test is always whether the thing works right, works reliably, and fulfills the stakeholder’s desires: not whether it fits that one design pattern you were trying to emulate.

Among the opportunities made available to me after moving down to the Boston area, the parents of a friend were looking to sell their car. A well maintained, sporty looking little 2002 R53 MINI Cooper S. Cars as a genre, mode of thought, topic, occupied very little of my mind at the time. They existed as two boxes to be checked: it would be nice to learn to drive stick, and oh god my current car was so boring, can’t I just buy a different one? My “ride”, or “whip” as the young ones call it, was a Nissan Sentra; a boring, grey sedan who’s primary characteristic was being unnoticeable and forgettable. I couldn’t get rid of it soon enough. When evaluating potential replacements I favored anything that was small, had two doors, and didn’t have an automatic transmission.

I tried sitting in a Fiat Abarth, the discomfort in doing so very quickly made me realize it was not built for people my shape, which I had previously thought of as being “normal human”, but clearly there must be a uniquely shaped subspecies for which this model was better suited. That delightful, red, ridiculous tiny bubble of a car on my Facebook feed, on the other hand, fit me quite well. Some might say, it was bigger on the inside. It had a supercharger, while I’m not confident in explaining what exactly that does, I’m confident in saying it sounds absolutely fantastic. Most important, it had a six-speed manual transmission. While test driving, I stalled it out in the middle of a busy intersection. I knew I had to have it. 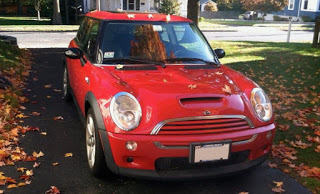 What followed was a repeated pattern of two months of wonderful, difficult, challenging driving, followed by some form of repair at significant cost. The handling felt like power steering was broken, in the best way possible: heavy, precise wheel turns. The zen of downshifting eluded me for many months. The blower to the driver and passenger’s feet was broken. The oil constantly leaked, requiring a pint of oil be kept at ready. The clutch broke when driving home one day, and while coaxing it to a safe spot parts which normally rotate independently of one another fused into a solid form. Have you ever driven a car with a newly installed clutch? It felt like pressing against nothing, like a stiff breeze could engage the clutch. I nearly had a heart attack driving out of the garage. Speaking of garages, I became a frequent visitor of German Performance Services, a local shop that specializes in BMW / MINI / Porsche. They were chill, and always got Chili back to me in better shape than before. I probably spent more money on repairs to that car than on the car itself, to no one’s fault other than my own.

After two years of this, the engine backfired half way up i89 on the way to a ski weekend in Vermont. As I was in no mood to pay and wait for the engine to be repaired (some of us have jobs we need to drive to!), at cost roughly equivalent to or greater than the total value of the car, it was time for a spiritual successor, a brand new F56 MINI Cooper. It was a strange transition, from a fairly raw driving experience to something I would expect from a BMW. It’s about as close you can get to an automatic transmission without flappy paddles; rev-matching ensures perfect shifts, no effort required. Handles easily, and pleasantly. I occasionally miss the old car, but having not seen the inside of a garage for anything other than seasonal tire swap and (free!) oil changes, it’s a trade off I’m happy with. 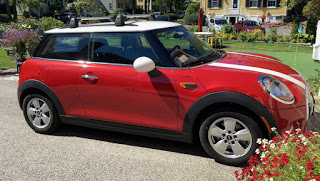